What are the eSign & UETA Acts?

In the ESIGN and UETA acts, there are four major requirements for an electronic signature to be recognized as legal under U.S. law. The eSign act is known as federal law.

Washington joined the majority of the US in passing the UETA act for the regulation of electronic signing and electronic transactions in 2020.

Before the ESIGN and UETA acts in 2000, Washington was one of the first states to implement their own electronic signature legislation. In 1997, the Washington Electronic Authentication Act or WEAA was made, albeit with a much narrower focus than the ESIGN act. The WEAA only recognised ‘digital signatures’, which require digital certificates to prove signers’ identities. But, from July 2019, this state law, the WEAA, was repealed completely from being defunct, as esignatures are used across the US without needing specific state-regulated digital certificates for signer identities.

The UETA & eSign requirements for Washington are:

No different than a wet signature, e-signatures are only considered valid if a user demonstrates a clear intent to sign, which Signable provides. 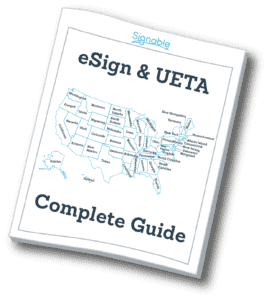 Join over 6,000 businesses who trust us to get their documents signed