An intriguing title for my latest blog you may be thinking to yourself, but, we all know somebody who says one thing but means something different but says “oh it’s basically the same thing” for example Turtles and Tortoises, they are the same as they are both reptiles but are different because Turtles live mostly in the sea, whereas, Tortoises live on land. Another common one is Oranges and Tangerines, both are citrus fruits but they are different shapes and taste different.

What has this got to do with Signable I hear you muttering with a confused look on your face…Well, something that I had initially perceived to be the same is Customer Service and Customer Success. There is a difference though, and that is proactivity. Customer Service is great and can be found everywhere (apparently) but Customer Success goes beyond just being reactive to customers needs, it allows a company to teach their customers how to become more successful, this can be as simple as promoting a feature that a customer may not be aware of or by looking at a customers usage over a period of time and recommending they upgrade or downgrade their account so that they can become more cost-effective.

So, I wanted to look at another company that does things which appear to be the same but is actually different. That’s when I remembered that I had read about a charity, Sailors Society, that had opened up a shop near to our Eastleigh office. Now, we all have preconceived ideas of what a charity shop is and looks like, they all look and offer the same thing…..or do they?! 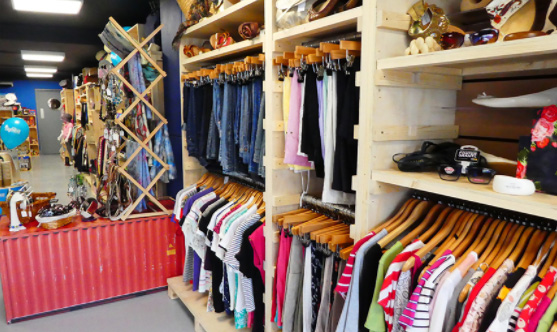 This is where Sailors Society is breaking from the norm, the shop in Eastleigh isn’t a “traditional shop” it is what they call a “quirky charity boutique”. This look is achieved by using industrial décor including container-like dressing rooms and crates to reflect its work with merchant seafarers. Sailors Society south coast retail manager Paul Long-Collins said “Charities are realising that we need to move away from the car boot or jumble sale feel, the high street is becoming more competitive, with so many charities in the retail market, so we’ve been driven by a new vision to make charity retail more exciting.”

Another way Sailors Society set themselves apart from other charity shops is by selling their own coffee called BySea which is available as a one off purchase or by monthly subscription with 100% of the profits going to the charity to help fund projects around the world. As luck would have it, I’ve bought myself a coffee machine for Christmas, you know, one of these fancy machines that use pods and it just so happens to take the BySea coffee pods (other coffee brands are available). So expect a review of their coffee in an upcoming blog!

So there we have it. A charity shop that appears the same as all the others from the outside but isn’t happy to just be one of the crowd and is trying something different to raise the charities profile and increase sales to support their projects. Here at Signable, we’re not selling our own brand of coffee (yet), but, just like a quirky charity boutique, we are doing things a little differently, we don’t just use Customer Success as a buzzword but we live and breathe the culture of success which makes Team Signable stand out from the crowd.